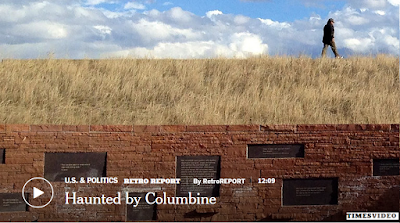 RetroReport is an award-wining nonprofit news org that revisits events from the past to set the record straight. I've been watching their work for quite awhile, and been really impressed. Their videos run exclusively on the New York Times.

I spent a year with RetroReport on this project. (They did all the work. I just let them come interview/film me, and helped with occasional fact-checking, etc.) I'm just amazed that they devote an entire year to get 12 powerful minutes to set the record straight.

The video does a great job in getting out the word that while Columbine is cited over and over as these killings continue, what we think we know about Columbine, even the basics, is nearly all wrong. (Not about jocks, Goths, bullying or Trenchcoat Mafia.)


And the Times has a nice accompanying article by Clyde Haberman.

If you're a survivor, be warned: parts of it can be emotional, and it briefly shows the killers.

I was actually really impressed by how much footage of Eric and Dylan, RetroReport chose to use: about 15 seconds. I have been thinking, talking and writing about this quite a bit, and was surprised by the huge response to my Erasing Dylan post. I think it's very important for the journalism profession, as well as victims. (I first wrote about it in Buzzfeed in 2013: "Let’s Stop Naming Mass Shooters In Our Reporting."

RetroReport choose not to erase the killers' images completely. I think that's wise. This is a documentary, and the killers are a big part of this story. To make this real, in a video age and in a visual medium, readers need a chance to picture who we're talking about. They need to get a sense of the boys, and their act. (Which is why even brief footage of the killers in the act is shown, waving their guns in the cafeteria. That's what happened.) 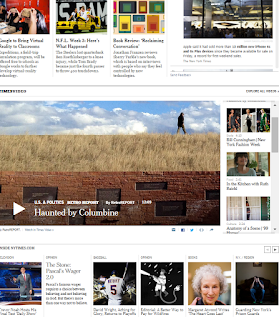 The producers do focus or linger on the killers. The vast majority of footage is on the victims and survivors, as it should be. Even the cover image they chose is haunting and beautiful, and entirely about the victims and survivors. (It's a shot of the Columbine memorial, with Rebel Hill rearing up behind it. If you've not visited, it's quite lovely, and tranquil.)

That's important, because that cover image is currently dominating the Times site: 80 percent of the width of the home page. It will live on for years to come as the visual symbol of this look back. It is not about the killers.

I think this is a great model for how to handle images of perpetrators: not an absolute blackout, but fading them into the background.

Speaking of survivors, I was so impressed by Sean Graves and John Savage, who appear throughout the video. (Additional, staggering video of Sean Graves here.) I really wish I had tracked them down to include their thoughts in my book. Principal Frank DeAngelis is compassionate and heart-wrenching as always. I hope I'm not forgetting anyone.

Linda Sanders and her daughter Cindy show up briefly in the video. They were wife and daughter to the heroic teacher Dave Sanders who died saving hundreds of kids. I can't describe how happy it made me to see Linda so gleeful throwing out the first pitch at this game at Dave Sander Memorial Field this week: 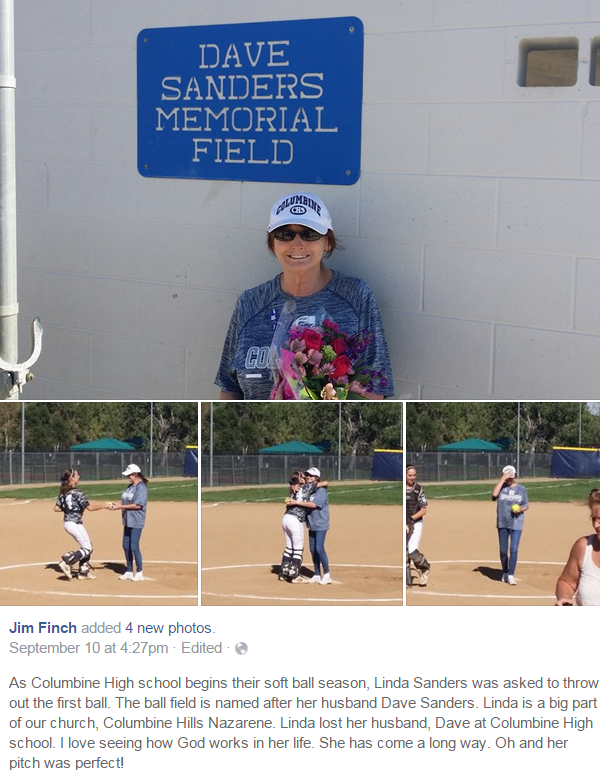 This got me thinking. It might be time to start a "How are they now?" feature on Columbine survivors from time to time on this blog.

FYI, for more video on this topic, here is my video introduction to Columbine, made with former South Park filmmaker Andrew Kemler in 2009.

And here is my free Columbine Teacher's Guide. I'm giving it away, just want to get word out to all the teachers who are using the book, and don't know of this free resource.
at 12:40 PM

Over 30 pages of new material.

Preview Soldiers First
Get Notified when it comes out.