For the last several years, I've had a thumbnail pic of Dylan K in the right margin of nearly all my web pages. I have little icons there to direct readers to various pages of interest, and he's been the icon for the page on "the killers" at my Columbine Online site. (It's the site I set up to share huge masses of the evidence I compiled during ten years researching/writing Columbine.) I chose a chilling pic of him, because it was a chilling act. Seemed appropriate.

But every time I see him there, even just those few pixels, it bugs me. And since I've embarked on the campaign to disappear these shooters as much as possible—maximum study with minimum necessary recognition—I've decided to expunge his picture there.

His pix are still on the "killers" page, because that's what it's there for: for people who want to see what they looked like, how they emoted, how they presented themselves. That's important, and that's staying, in that narrow spot. But he's not going to loiter around the rest of my site.

I'm toying with a new icon that doesn't just erase him, but drives home the point that he's been erased. How about this? 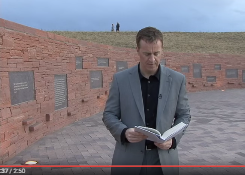 Let me know what you think.

Note: he still shows up on the freeze-frame image for the Columbine intro video. I have to change that in youtube somehow. I'm not sure how. I'll look into it. I'd prefer maybe something like this:


Update: A question in the comments made me realize that while I've been discussing this concept of "disappearing" killers quite a bit, it's still a new idea to most people. So my Buzzfeed piece  should provide some context: Let’s Stop Naming Mass Shooters In Our Reporting. It was an early attempt, but it's a start.

Preview
Get Notified when it comes out.

Click for options to buy from: Amazon, B&N, Borders, local indie store or Kindle. Available in audio, large-print and Japanese.